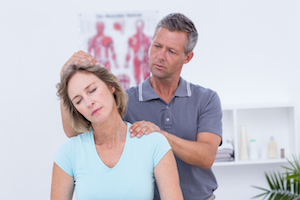 Some patients may worry about adding to pain or additional injury

Whiplash is a neck injury that occurs from a forceful, back-and-forth movement of the neck. The injury often leads to pain and stiffness that can last for a while, and about 50% of patients that have a whiplash injury experience symptoms for more than one year. There is strong evidence that specific exercises for the neck are effective for treating different types of neck pain, but this has not been proven for whiplash. For this reason, exercises are not recommended for these patients. Instead, patients with whiplash are usually told to remain physically active and perform general exercises for their pain. Unfortunately, this has not been studied in much depth either, and it is not known how effective of a strategy it is. To investigate this matter in more detail, a study was performed. Since some patients fear that specific neck exercises could add to their pain or cause another injury, another aspect was added to this study. This was called a behavioral approach, which helps patients understand their condition and what they can do to improve it. All three of these approaches were compared to one another in this study.

Results from older study are analyzed in current study

In order to conduct this current study, the results from an older randomized-controlled trial (RCT) were analyzed. An RCT is a powerful study in which the participants are randomly assigned to different groups, each of which is given a different intervention. In this RCT, 216 patients who were diagnosed with a whiplash-associated disorder (a problem that came about due to whiplash) were randomly assigned to one of three groups. These were the neck specific exercise (NSE) group, the neck specific exercise with behavioral intervention (NSEB) group, and the prescribed physical activity (PPA) group. Patients in the NSE group followed a twice-a-week, 12-week exercise program that was led by a physical therapist. These exercises targeted the deep neck muscles and progressed based on the amount of symptoms each patient experienced. Patients were also given a home-exercise program and told to avoid any exercise that led to pain. In the NSEB group, patients followed the same program as the NSE group, but they waited two additional weeks before beginning exercises. During this time, they formulated specific activity goals and were given education designed to help them change their behavior. They were also encouraged to continue exercising even if it led to pain, as long as it wasn't severe. In the PPA group, patients were prescribed general exercises by the physical therapist, but they did not perform any neck-specific exercises. All patients were evaluated before the interventions and then three and six months later using different measurements.

Results from this study showed that neck-specific exercises helped patients improve more than general physical activity. Both the NSE and NSEB groups experienced greater improvements than the PPA group in pain intensity and neck muscle endurance. Neck muscle endurance is a measure used in patients with neck pain, and those with less neck pain have better endurance. In addition, patients in the neck-specific groups reported greater satisfaction with their treatment than the PPA group, as 55% of NSE and 67% of NSEB patients were satisfied, compared with only 19% of PPA patients. Finally, there were not many differences between the results from the NSE and NSEB groups. Both groups improved significantly, but adding the behavioral approach did not appear to increase the effectiveness of the neck-specific exercises. Based on these results, it seems that neck-specific exercises are helpful for treating patients that have pain and disability from a whiplash injury. Using this type of treatment is likely to be better than general physical activity, and should be prescribed by physical therapists and other doctors.