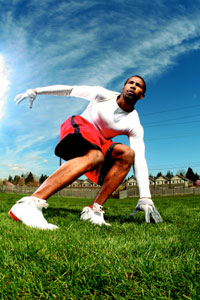 Despite widespread practice, actual usefulness of stretching not clearly defined

Stretching before or after physical activity is an action commonly executed by many, usually with expectations of reducing injury risk and soreness associated with injury, increasing looseness and well-being, or enhancing overall performance. Shockingly enough, despite its widespread popularity, the specific benefits of stretching have not been clearly established. Studies that have been conducted on the subject matter in the past have either been inconclusive or have shown the positive effects of stretching to be small and not statistically significant. Based off of this lack of conclusive information, a powerful study known as a randomized trial was conducted to determine if a stretching program before and after vigorous physical activity reduces the risk of injury or soreness.

The study design used was unique in that it was entirely internet-based, with no actual interaction with the study's conductors, and the only requirements were that subjects were 18 or older and took part in vigorous physical activity at least once in the past week. This set-up allowed for a large range of people from anywhere in the world to participate, giving the study power due to its size. Potential participants were screened for eligibility, and a total of 2,377 people were selected, then randomized into a stretch group (1,220) and control group (1,157). Participants were asked to log on to a designated Web site and complete a questionnaire about their age, physical activity, stretching habits and beliefs on the effects of stretching.

The stretch group was asked to stretch seven lower limb muscle groups on both sides of the body before and after every occasion of vigorous physical activity with a set of stretches specifically designed by physical therapists and posted with images on the site. Participants were also asked to not stretch any other lower limb or trunk muscle group aside from those in the stretching protocol for the next 12 weeks. The control group was asked to not stretch any lower limb or trunk muscles over the 12-week interval. All participants were instructed to carry on their usual exercise patterns and usual stretching routines for upper limbs. For the 12 weeks, participants were sent a weekly e-mail reminder to visit the Web site to provide details about soreness, perceptions of looseness during and after exercise, amount of vigorous activity, compliance with the trial protocol and adverse events. Any injuries of the lower limb or back were to be fully documented. Primary outcomes of the study were time to injury and soreness, and secondary outcomes included time to muscle, ligament and tendon injuries, severity of soreness, and perceptions of looseness before and after exercise.

Benefits of stretching shown to be minimal, questionable

Overall, 687 participants experienced at least one injury during the course of the trial, and about 25% of participants reported bothersome soreness in any week. Stretching did not have a clinically important or statistically significant effect on risk of all injuries, but it did produce small reductions in the risk of bothersome soreness, with its mean risk being 24.6% for the stretch group and 32.3% for the control. In terms of secondary outcomes, stretching was also shown to minimally reduce the risk of muscle, ligament and tendon injuries, but these figures must be approached with caution since they are in contrast to the primary finding. The study's conductors pointed out that if there were an actual reduction in risk of injuries to the specific areas, there would also be a reduction in the all-injury risk, which did not exist. Despite this lack of consistency, it's possible that the figures could still have some merit. Stretching was also shown to increase the perception of looseness both before and after physical activity.

The study's conductors therefore suggest that for those who enjoy stretching or believe it reduces soreness or increases looseness, these findings support their habits enough for them to carry on stretching regularly. Those who don't enjoy stretching, on the other hand, will need to balance the benefits of a small reduction in soreness, small increase in looseness, and perhaps a reduction in muscle ligament and tendon injuries against the effort and time it takes to stretch. So, while it appears that stretching does aide some athletes in a subjective response to more looseness and less soreness, according to this study, it does not have the effect on injury prevention that has been promoted and accepted for so long.