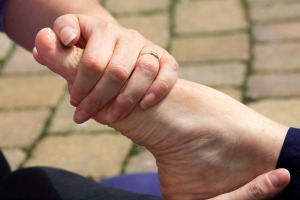 Evidence is limited on how to manage these patients

Plantar heel pain syndrome (PHPS) is a general term used to describe a number of foot conditions that usually involve sharp pain in the middle of the heel that's particularly severe upon waking. PHPS is quite common, as about 10% of the population will experience it at some point, and these cases represent 15% of all adult foot complaints. Conservative treatment such as physical therapy is often used to treat PHPS, but there is minimal evidence to base the best management strategies on. Therapeutic ultrasound is commonly used, but no strong evidence exists to support it. For this reason, a powerful study called a randomized clinical trial was conducted in which ultrasound was compared with deep massage therapy as treatment interventions for PHPS.

A total of 51 patients with PHPS were selected to participate and were randomly divided into two groups. The deep massage therapy (DMT) group was treated with specific massage techniques to the back of the calf muscles and was also instructed to stretch their calves while laying down using an elastic belt. The ultrasound group was given three minutes of ultrasound, which sends high-frequency sound waves to the painful area of the heel. All patients underwent eight treatment sessions by physical therapists 1-2 times per week over six weeks. In addition, subjects were told to perform five repetitions of different exercises to stretch the calves three times a day.

Overall, both treatment interventions led to improvements for all patients. When compared to one another, pain was found to be reduced to a similar degree in both groups; however, results indicated that the DMT group experienced more significant improvements in functional status than the ultrasound group. This means that these patients were able to function more easily in their day-to-day lives after the six-week intervention. Based on these results, it seems that a program that uses DMT and prescribes specific stretches can significantly improve the status of patients with PHPS. Though more studies are needed to further confirm these findings, physical therapists should consider incorporating these methods when developing treatment strategies for PHPS.

-As reported in the April '14 edition of Manual Therapy