As the communicating bridge between our powerful leg muscles and our springy platform feet, the ankles play an important role in keeping us successfully upright, bipedal animals. These crucial components can become compromised when relied upon to navigate unstable surfaces, and one can be left with a painful and debilitating nuisance. The good news is that, unlike the brain, we have a good understanding of ankle anatomy and function. The body has an incredible ability to heal itself, and often professionals like physical therapists can help to expedite that healing process of an ankle injury.

Click the headings to learn about ankle anatomy and common causes of ankle injuries: 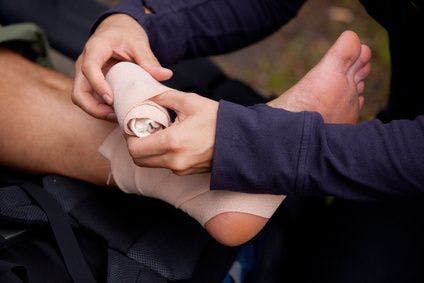 The talus then rests atop the calcaneus, or heel bone of the foot. This is called the subtalar joint. Together with the tibiotalar joint, these junctions allow inversion and eversion.

Inversion and eversion are important to allow walking on unstable and uneven surfaces without falling. In addition to these multiple joints and joint surfaces, there is a network of connective tissues keeping these bones held together called ligaments.

The ligaments on the lateral (outer) aspect of the ankle are the:

The ATFL and CFL are the most commonly injured ligaments and are affected in an inversion ankle sprain (described in detail below).

On the medial (inner) side of the ankle we have the:

These ligaments are known collectively as the deltoid ligaments, which are affected during an eversion ankle sprain.

Ankle sprains are one of the most common sports injuries, estimated to impact thousands to tens of thousands of people on a daily basis. An ankle sprain can occur during daily activities as simple as stepping down off of a curb, but people at highest risk may be those participating in sports involving quick cutting or lateral movements requiring rapid changes in direction and speed. The most reliable predictor of injuring your ankle is having done it previously.

The type of ankle injury often has to do with what specific tissues or combination of tissues were affected. The most simple way to arrange these injuries would be into bone, ligament, or tendon as the main damage.

The first step in diagnosing an ankle injury is to determine whether or not radiographs (x-rays) need to be taken to look for a fracture. In order to save time and resources, a set of rules were developed with research to better indicate when a fracture is possible or likely. This set known as the Ottawa Ankle Rules are as follows.

Ankle treatment of a simple ankle fracture typically will involve a period of immobilization in a cast.

Depending on the severity of the fracture, you may be required to unload the tissues by using crutches while the bone heals. After an ankle fracture, it is important to see a doctor of physical therapy in order to safely return to walking. Your ankle tissues will shorten when immobilized in a case over time, so this will often require exercise and manual ankle injury therapy to improve range of motion and strength.

When the ankle is quickly moved beyond its normal range of motion, ligaments can get stretched beyond their limits, and the result can be a sprain. If swelling, pain, and even bruising result, but the rules above do not indicate a need for imaging, we are often dealing with a sprain. Low-grade sprains will often heal themselves with time and rest, but seeing a physical therapist for diagnosis, manual ankle therapy, and strengthening/balance training has been shown to significantly decrease the time before returning to your favorite activities.

Tendon injuries are diagnosed based on location of symptoms and mechanism of injury. When pain the ankle or foot is related or reproduced by pressing on the muscles further up the leg, we become suspicious of the tendinous attachments to the bones. A key predictor of tendon injuries comes from how/when the person first started experiencing the symptoms. Common mechanisms of injury include repetitive impact activities such as jumping or running.

Seeing a skilled ankle physical therapist is crucial with nagging tendon injuries in order to determine the source of dysfunction, whether that be a weakness, muscle imbalance, joint hypomobility, joint hypermobility, or a footwear issue. Often the most beneficial ankle sprain treatment for tendon injuries will include a training modification and specific strengthening exercises called eccentrics. These are very individualized ankle injury treatments, so it's important to team up with a Doctor of Physical Therapy such as those at the Portland Area Stride Strong clinics who are willing to put the time into learning about you and your goals.

Select a red circle from below.